HOW TO DEAL WITH CONTROVERSIAL MONUMENTS?
A semiotic and cultural geographical approach

Monuments and memorials are meant to be stable over times in their physical forms, but their meanings are dynamic, reflecting changes in culture, social relations, concepts of nation and views on the past. For this reason, monuments representing outdated cultural values often become controversial and their permanence in public space problematic. An example is offered in the Confederate monuments in the US that were removed or plans for removal were announced during the Black Lives Matter protests. This recent controversy adds to several others across the world.

This lecture engages with strategies that can be used to defuse the controversies around monuments. It first presents an approach connecting semiotics and cultural geography to treat the meaning-making and interpretation of monuments. It then builds a typology of strategies used with controversial monuments that include both the top-down strategies employed by institutions and the creative solutions that have been used by citizens in a bottom-up way.

Federico Bellentani’ s research interests range from semiotics, cultural geography, planning theory and national landscape imagery. The aim of his research is to sketch out an innovative approach to investigate the ways in which urban space conveys meanings and how they are interpreted by different audiences. To achieve this, he concentrates on specific components of the built environment: monuments and memorials.

Federico received his PhD from Cardiff University, UK (2017). He holds a MA in semiotics (2013) and a BA in communication sciences (2010) from University of Bologna. Today he is vice-president of the International Association of Semiotics of Space and Time and Head of Marketing and Communication at an Italian ICT company. 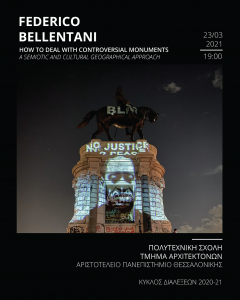